ROCKFORD, Wash. — David Gady can turn straw into heat, gas and soil nutrients, which he hopes one day will be as good as gold for him and other farmers.

Gady, a Rockford, Wash., farmer, has built a three-tiered “gasifier” that turns bluegrass screenings and other ag waste into biochar — charred organic matter that can be used as a soil amendment.

Biochar is the umbrella term used to describe the material created with the application of heat and pressure. The process also produces heat and gas. The properties of biochar vary depending on the process and the ag material used.

Though the technology is in its infancy, researchers hope to find an economical way to produce biochar that can boost crop yields, add organic matter to soil and reclaim soil that’s become too acidic. 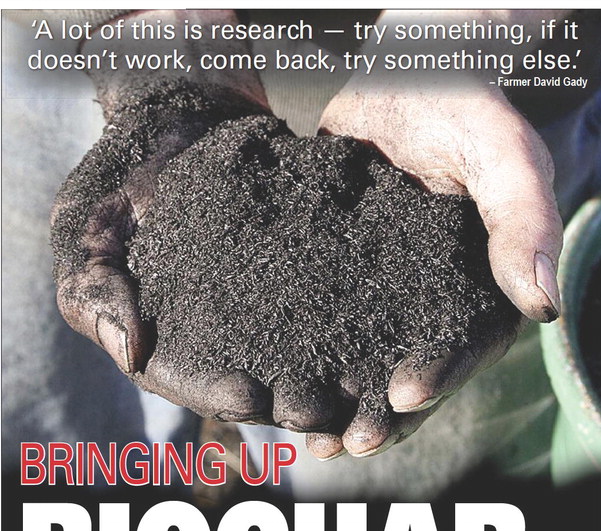 TOP AND INSET PHOTOS: Rockford, Wash., farmer David Gady holds up biochar made from bluegrass screenings Jan. 15 on his farm. Gady, seen above, is partnering with a Spokane company interested in possibly commercializing the process Gady uses to produce biochar, which may show benefit when used as a soil additive.

They also believe the gas created by the process can generate electricity or heat a farmer’s home or out buildings.

“Plus, what else haven’t we thought of?” Gady said. “It probably just depends on how far you can think outside the box.”

IBI has submitted a proposal to include biochar in the American Carbon Registry, a carbon offset program. Jirka expects a reply in the next six months.

Few farmers in the United States are producing or using biochar on a large scale, but many trials are underway around the country, said Thayer Tomlinson, communications director for the initiative.

Materials used to produce biochar vary depending on availability, price and scale of production.

Forestry residue is a top choice because of its low value and accessibility compared with other agricultural residues such as straw and seed cleanings, Jirka said. Manure could also be used.

“With the cost of biochar where it is right now, it is often more beneficial for high-value crops,” Tomlinson said.

Biochar prices range from $1 per pound up, or less per pound for larger amounts. Price depends on the type of biochar, she said.

Applying biochar to crops slightly increases overall growth, Tomlinson said. Fields could use less fertilizer and have the same result with biochar.

However, biochar should be “weathered” before use on a field, she said. Freshly made biochar is like a sponge, Tomlinson said, and can pull nutrients from the soil for the first year or two before it begins releasing them.

Before applying biochar to their land, farmers should understand its chemical properties and how it interacts with the soil, Jirka said.

“Once you add it, it’s there for a long time, so you better make sure it gives you the response you want,” said James Amonette, senior research scientist at Pacific Northwest National Laboratory, a U.S. Department of Energy research laboratory in Richland, Wash. “It’s a major change, it’s not easily undone.”

The initiative is developing a series of tests to ensure material doesn’t contain toxins or come from contaminated feedstocks.

Biochar is made through a process called “thermochemical conversion.” It ranges from low-temperature, slight charring of the feedstock biomass to full combustion.

The biomass is initially heated with an external source, usually a fossil fuel, Jirka said. The external heat source is then switched off and the gases released are captured and circulated through the system to maintain the reaction.

When a system is optimized for biochar production, only a small amount of gas remains after the reaction is complete. However, that gas could be used for heating or to fuel a generator, Jirka said.

Several research projects are underway, but Jirka doesn’t believe any systems are economically viable yet without subsidies.

John Miedema, owner of BioLogical Carbon LLC in Philomath, Ore., sees the most promise for biochar as a co-product of energy production.

“It’s pretty clear, particularly in the Northwest, we’re going to be making energy with biomass,” he said. “Can we show there’s more value in a fraction of that carbon that’s coming in as biochar, as opposed to just ash?”

The primary challenge is adding value to biochar so that it can be produced in a economically sustainable manner, said Manuel Garcia- Perez, associate professor of chemical and bioengineering at WSU.

“The costs of collecting your biomass, charring it and then re-applying it to your land are not trivial,” he said. “The people who can wait 25 or 30 years to see a return, those are the people who will do it now. Until society says, ‘We’ll help you get over that 25 years, we’ll give you a subsidy or something,’ I don’t see it becoming the next thing everybody’s going to do.”

The biochar initiative will soon release a report on the state of the industry. Tomlinson said one of the biggest challenges is overcoming a lack of public awareness. The IBI hopes to work with extension service agents to tell farmers about the potential benefits of using biochar.

Many projects are self-financed or funded through friends because of the difficulty in finding other sources, Tomlinson said. It’s not certain how much funding is being devoted to biochar research, she said. Some comes from the USDA Agricultural Research Service, but overall, funding is “tight,” she said. Some private companies are funding field trials.

She expects biochar to gradually become segmented for specific purposes, such as recovering the soil at old mine sites or replacing horticultural substrates like peat moss.

“We’re still learning a lot about how it interacts with crops, soils, water and nutrients, how it binds toxins, all types of things like that,” Tomlinson said. “We know a lot more than we did before, but we still have a lot to learn.”

“I think we’re beyond just doing it in the lab,” he said. He would like to be “getting it done by the farmer and out of the university, so the farmers are having it in their hands, using it and coming back and saying, ‘This we like, this we don’t like.’” Gady, the Washington state farmer, is a partner in Synthigen, LLC, a Spokane-based company looking for commercial uses for either his gasifier system or for the products it creates.

Gady estimates he spent upwards of $1 million building the system on his farm, but he’s aiming to design a system that would cost about $300,000 on the market.

Farmers could use biochar in the field, Gady said, but right now it’s so light it might not stay in one place. He can see using it in smaller trouble spots in his soil, but not broadcasting it over whole fields.

Biochar might never become a major product in Gady’s lifetime, he predicts, but he hopes to perfect his system over time. 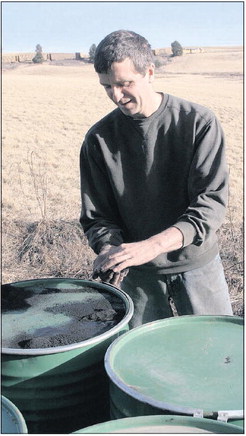 Rockford, Wash., farmer David Gady demonstrates the absorbency of his biochar made from bluegrass screenings by putting some in the water on the lid to a container Jan. 15 on his farm. Gady is partnering with a Spokane company interested in possibly commercializing the process Gady uses to produce biochar, which may show benefit when used as a soil additive.

Click here to see this page in the eEdition: